Adderall Abuse is Climbing, and Adderall is Not as Safe as You Think.

Adderall and other stimulants are most often used to treat attention deficit hyperactivity disorder (ADHD) and narcolepsy. Many people believe Adderall is a safe and helpful prescription drug that can help with focus and task completion. However, Adderall is just a name brand amphetamine that acts as a stimulant to the brain, which produces a similar effect to meth according to Addiction Center. With 16 million prescriptions for stimulants written, and 6.1 million children between the ages of 2-17 being diagnosed with ADHD, we believe it is important for you to know about the addictive nature and adverse side effects that these stimulants and Adderall abuse can cause.

Adderall is an Amphetamine and Affects Your Nervous System

Amphetamines and other stimulants used to treat ADHD are classified as Schedule II drugs, which means they can provide positive medicinal effects but also come with considerable potential for abuse. These highly addictive, mood-altering drugs affect your central nervous system and stimulate certain neurotransmitters. While Adderall promotes alertness, improves memory, increase motivation, and promotes better focus in a person suffering from ADHD or narcolepsy, it can overstimulate someone who has correct neurotransmitter stimulation.

In other words, if your brain is a lightbulb and you have ADHD or narcolepsy, a stimulant can give your brain the right amount of electricity to turn on the light. If you don’t have ADHD or narcolepsy and you take the stimulant, it’s like you are feeding the bulb more electricity than it can handle and as a result, it shorts out or bursts instead.

Relying on the stimulant to function or being dependent on it for certain behavior or to complete specific activities, are signs of Adderall abuse addiction. Excuses of not being able to finish work without it, requesting larger doses, and neglecting other activities are also signs of addiction.

Adderall Abuse is A Fast-Growing Problem

These common stimulants are being abused more often as prescriptions are passed out. With 6.1 million children diagnosed with ADHD and an estimated 50 percent of patients diagnosed with ADHD under the age of 18 years continuing to have symptoms as an adult, the potential for abuse is astronomical. According to Johns Hopkins Bloomberg School of Public Health, “misuse and emergency room visits related to the drug have risen dramatically.” And a report from the US National Library of Medicine and National Institutes of Health says, “The nonmedical use of prescription stimulants represents the second common most form of illicit drug use in college, second only to marijuana use.”

The stimulants can provide people with a feeling of confidence, an increase in concentration, and a suppressed appetite, which appeals to certain groups of people including athletes, dieters, students, and professionals. But taking any prescription drug while not directed by a doctor is considered abuse and is dangerous to your health. You are also abusing the stimulant if: 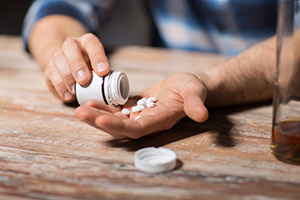 The Dangers of Adderall Abuse and its Side Effects

Adderall and other amphetamines are more dangerous than you think. Whether you are taking the drug correctly or are abusing it in any of the ways listed above, you can experience severe side effects, and abuse can end with you in the emergency room.

Some side effects of amphetamines include:

Misuse of amphetamines can cause:

Why You Shouldn’t Self Prescribe Adderall

If you believe someone is addicted to Adderall or another stimulant, seek help immediately. It is important to be aware of all of the dangers of stimulants and to use them with caution. Call Primo Prevention to learn more about the dangers of Adderall or to help educate the children and young adults in your life.

The Risks of Legalized Marijuana
Next
Quitting Tobacco? We’re Here to Help

The Dangers of Prescription Opioid Use What Happens to Your Body

Suppose your doctor gives you a prescription for an opioid pain reliever. But, they don’t really explain anything other than you can take a pill every four to six hours, and it will help with your pain. What your doctor doesn’t tell you is just as important. Opioid pain relievers are exceptionally addictive medications. Over the course of a single year, opioid prescription pain medications were responsible for over 17,000 deaths. Unfortunately, many people do not realize the extent of the side effects or the risks associated with taking prescription opioid pain medication until it’s too late.

Use this form to find things you need on this site